Stephen Lawhead, The Warlords of Nin. This book was a big influence on me: it put me off mass-market paperbacks forever. Here's why: 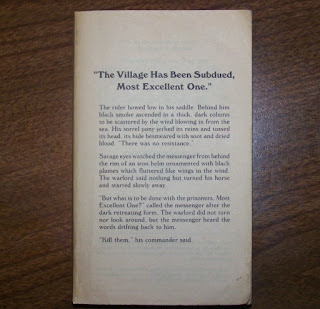 That's right, the cover came off, probably the second time I read it. (Note that it may have been read before I had it; it may have come from a garage sale.) Other than that? Bad guys with magic (or fate on their side?), good guys without it (except for the magic sword), necromancy, and a hidden monotheism. (Hidden in that most people in the book are unaware of it, although it is a big part of Quentin's story.) Also the smith they ask to make the sword (in the second or third book, I think) doesn't want to touch the ore they use because it has the power to heal. Comfortable with his deformity? At least he has a hunchback instead of a lame leg... I think.

Taylor Caldwell, Dear and Glorious Physician. I must have found this in my grandmother's basement and read it in ninth grade, because I remember giving a book report about it where the teacher had to tell me that no, actually, Taylor Caldwell is a woman. I'm pretty sure I loved it at the time (it gave me the word "pusillanimous", after all) but I'm more skeptical now. It had mysticism and hypnotism (I'm starting to see a pattern here) and the master and his maidservant waiting until their respective spouses had died (of old age or fever or something) to marry? Seriously? Not that I think it was wrong to wait; I agree 100% with that. What I think might be wrong is that they had each other lined up already. It also had martial arts and a smart, skeptical main character: Luke the physician, if you didn't know. As a boy and a young man. Also a romance that doesn't go anywhere (I'm not sure how to describe it without saying what happened) although I don't think I cared much at the age when I read it.

The Bible. I'm a little hesitant to include this here, but why not? In tenth grade or so, I went to an Acquire the Fire conference where we were encouraged to complete a year-long Bible reading plan. I did read it (at least, I checked off all the boxes... in pencil in case I wanted to do it again) but I didn't remember much of it afterwards. I don't think it was worthwhile. Forcing yourself to get up at 6:00 to spend 10 minutes reading a couple chapters you won't remember by the end of the day is not a good way to study the Bible. I think now you really need to have a hunger to glean meaning from it, but at the time I'm pretty sure I was just doing it because I was told I should. Reading it now in a much more ad hoc fashion, I find all sorts of things that I don't remember one bit from that read-through.
Posted by Joshua at 4:05 PM