This alternate history starts off unexceptionally, but a little over 100 pages in becomes engaging and completely horrifying. The year is 1938 and Sophie Hunter is a 15-year-old student in a Scotland preparing for war. The twist (highlight it if you want to know what makes this an alternate history) is that this Scotland is part of the Hanseatic League, whose control over munition production is the only thing guaranteeing their freedom from the united Europe Napoleon's victory at Waterloo created.

This book is a disturbing juxtaposition of the normal (Sophie's friendships with her classmates and others) and the extraordinary (secret pscyhological experiments, hypnotism, ghosts and mediums, eugenics). Sophie's placid acceptance of some of these horrors only makes it worse.

I'm ambivalent about recommending this. On one hand, it's effective and well-written: it's amazing and thought-provoking how different the world Sophie lives in is. On the other hand, I don't believe the spiritual aspects (seances, mediums, automatic writing, astral projection, hypnotism) are good, although Sophie, though initially reluctant, seems to embrace them. This book seems to be one where I greatly enjoyed the writing (and the suspense) and detested some of the content.

The author is apparently planning a sequel, titled The Snow Queen, and possibly a third book as well.
Posted by Joshua at 10:33 AM No comments:

A Posse of Princesses

Somehow charming despite some infelicities of language and description, especially noticeable early on.* Parts of the plot were also a little transparent, although I didn't guess what was going on immediately, but for some reason, I ended up liking it. I suspect my inner critic may have been turned off when I read most of it so that I just ended up enjoying the romance.

While fairly light reading, Rhis also grows personally during the course of things. (Others, perhaps, not so much.)

In the end? I think this is pretty good light entertainment, not very challenging—maybe good for a "rainy day" read—but not completely fluff either.**

* What is a "dining room built on two or three levels?" Is it on two levels in some places and three in others, or is the viewpoint character not sure? To be fair this line is probably what bugged me most about the entire book, although the word "nacky" comes in second and the fact that everyone of importance is a prince, princess or other peer third.

** The other thing, which the author may or may not have control over, is that $22.95 seems too much to pay for a 300 page YA book, even if it is hardcover and printed on very nice paper. Maybe it's intended to be a library edition? The paperback looks to be a more reasonable price.
Posted by Joshua at 8:43 AM No comments:

The Adoration of Jenna Fox

This is a book that focuses on a single sci-fi conceit (or maybe one and a half, depending on how you count them) and tells a highly emotional, disturbing story. Honestly, though, I was more disturbed by the ending's moral implications (even in a non-SF world) than by what the technology made possible. This is a book that I will probably keep thinking about for a while (where "a while" is probably the next few days :). Story-wise, it seems pretty tight, although the semi-poetic interludes on the gray pages were a little weird.

Don't read the copyright page Library of Congress summary or find out what book it reminded me of unless you want to be somewhat spoiled.

In the end, I'm somewhat ambivalent about recommending it because of the moral spookiness. There isn't a whole lot of plot: it's all about Jenna's recovery and discovery of herself after an accident her parents won't tell her much about. If you like that kind of very focused story with few characters (and even fewer that matter), then you might like this.
Posted by Joshua at 7:28 AM No comments:

OK, this is less off-topic but still somewhat so: Afterlife Blues finally started! Yay! (It's by the same authors as the smart and funny sci-fi comic A Miracle of Science, which has been finished, i.e., complete, for a couple years.)
Posted by Joshua at 2:45 PM No comments:

This has nothing to do with books (I refer to Google and experienced relatives for information on gardening), but: 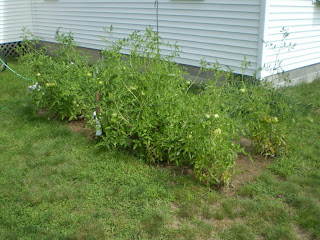 There are 12 plants there, in case it's hard to tell. :) (Next year I am definitely planting them further apart, if I get a chance to keep gardening, and I may plant fewer and try growing some other things besides... tomatoes. FYI, this is my first year gardening.) I planted the seedlings early June, but so far only two tomatoes have actually ripened... and I had to cut away something like 2/3 of each because they had gone bad. Ugh. Another one is visibly ripening now, but who knows about the rest?

I haven't pruned them much at all either, and the stakes are obviously somewhat impromptu. If I do this again I will probably get cages for all of them and put them on much earlier: even the ones with cages on them now are falling over. Because of the tangle of leaves it's hard to see why, but they are really not stable at all, and I seem to have to push them back towards upright every morning when I water the plants.

I may start another blog if I keep wanting to do off-topic posts like this one, since my other (non-Blogger) blog is so dead. I'm not sure what I would call it, though... (I'm tempted to try myotherblog.blogspot.com but it's probably taken.)
Posted by Joshua at 12:23 PM 1 comment:

Witty, funny, sweet and poignant, err, pungent, sniff—sorry, it must be my allergies. Millicent is an 11-year-old genius who doesn't know it. Well, she knows very well that she's a genius; what she doesn't seem to realize is that she's only 11 years old (emotionally and socially*) and, you know, not exactly ready to choose the life of solitude that she seems to be headed for. So it must be a good thing that her mother just signed her up for volleyball and tutoring in addition to the college class on poetry that she really wants to take... right?

Great book. I must admit, having just looked it up on Amazon to double-check the spelling of the title, I am a bit disappointed that there appear to be sequels, because they might not live up to this standard.

For comparison: It reminds me most strongly of Hilary McKay's Casson family series.

* Paraphrasing: "How could you be alone when you didn't leave time for aloneness in your schedule?"
Posted by Joshua at 8:17 PM 1 comment:

The Dirt on Clean: An Unsanitized History

By Katherine Ashenburg, and non-fiction (an exception for me!). Found via Stephanie Burgis.

Basically a light, easy to read history about the Western theory and practice of cleanliness over the last 2,500 years or so. Entertaining and even funny to read (though perhaps the humor comes from awkwardness regarding the subject), though I had my doubts as to whether the strength of a few assertions was supported by the source material. (I didn't actually check, of course—that would be work.)

A pretty good light read, and probably shorter than it looks: the margins are fairly generous.
Posted by Joshua at 1:24 PM No comments:

By Michael Reisman. Found via Sara Beth Durst of the great Into the Wild, who liked this book a bunch more than I did.

Cute and somewhat funny by the end, but the humor in the beginning seems to fall flat in the face of pedantic language and a lackluster narrative voice. It's possible that someone less familiar with science or science fiction might find the infodumps more tolerable, but that person isn't me (and my little brother's comment was "Not as good as I expected", so I wasn't the only one).

The basic story: Simon Bloom discovers a magical forest, and no sooner has he gotten to the center than a grimoire drops from thin air onto his head and knocks him out. Only it's labeled "Physics, Teacher's Edition" or some-such. This may be magic with a science twist (perhaps science fantasy would be a good label), but, despite what Simon thinks, it still looks like magic to me. Various adventures involving a cloaked figure, a mysterious new principal with a hair-do that might be alive, and puns with more setup than punchline ensue.

In the end, this book wasn't too bad (and it looks like there's plenty of room for sequels), but it seemed a little too simple and bland for my taste, although it does pick up some close to the end.
Posted by Joshua at 5:46 PM No comments: